If you’ve been keeping up with this blog, you know that I’ve covered some strange and unique billboards—like the one that gives you a relaxing massage (yes, I said massage) that was featured in this article. Billboards may seem like a pretty straightforward method of advertising, but they should never be underestimated as a catalyst for creativity. 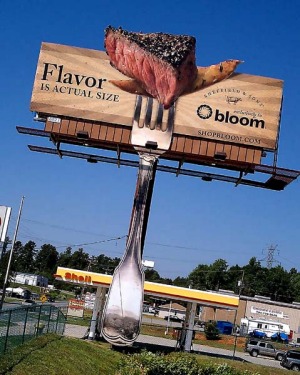 This continues to be one of the most popular scented billboards on the internet. Photo via Axiom Designs. Creative Examples & Personal Nostalgia

Scented billboards are one such way to creatively promote a product. When looking up scented billboards online, one of the most common images that you’ll see is a billboard showing a medium-rare steak and a golden french fry. This billboard promoted Bloom, which was a chain of grocery stores that had locations across the east coast of America. It’s not just the design that’s attractive in this case but also the scent.

Many of us have enjoyed the delicious smell of a grill, and that’s exactly what this billboard wanted to capture. It’s said that a cartridge behind the billboard produced the scent as a fan blew across it.

When I first learned about scented billboards, I couldn’t help but think back to my childhood watching movies that featured a concept called “Smell-O-Vision.” Back in 2003, Nickelodeon released a movie called Rugrats Go Wild. At various points in the movie, the audience would be prompted to scratch and sniff a card that contained multiple smells relevant to the movie. It was admittedly a gimmick, but nevertheless, it created so much hype for the product and boosted engagement.

A more recent scented billboard campaign was done in Argentina back in 2021. Two agencies named HOY BUE and ATMA wanted to raise awareness about COVID-19 symptoms. Shopping malls across the country featured boards that would produce smells of coffee and even orange juice. These are known to be very distinct and rich smells. The point was that if people could not smell anything, then that’s a possible indication of having COVID-19.

For all our sakes, no one has created a scented billboard for a trash company (at least, as far as I know). I mean, could you imagine? Perhaps the billboard could say something like, “We handle the smells so you don’t have to,” as a strong scent of spoiled milk, dirty diapers, and last week’s casserole burn into the nostrils of passersby.

The key to engaging an audience is to tap into their senses. This can obviously be seen with movie theaters. Screens have become expansive and the audio systems cause your seats to rumble. You’re not just watching a movie, you’re in the movie. In the case of billboards, you’re not just seeing a billboard, you’re experiencing what the product in question has to offer. For the most part, scented billboards are rare, but maybe in the future, they will become more commonplace and accessible in the industry.

While navigating through billboard and marketing websites, you’ve probably come across the term OOH (out-of-home) advertising, so what is it... ler mais
AGENCY: ,