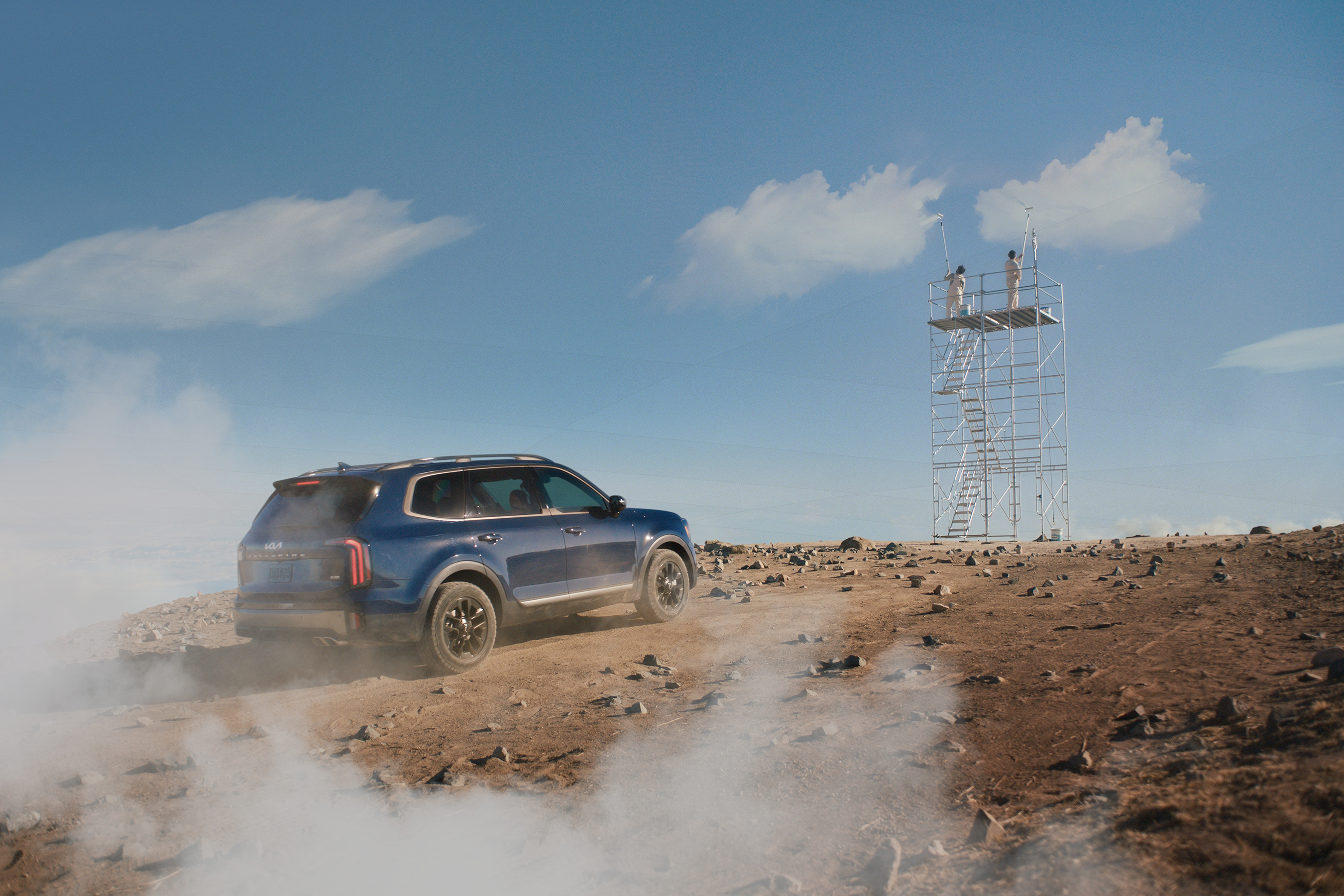 Instead of getting your head out of the clouds … what if you can drive headfirst into them? With the launch of the new Telluride X-Pro, Kia is taking on a whole new meaning to the phrase: “the sky’s the limit.” For the vehicle that provides the most elevated and refined driving experience of the Kia family of SUVs, creative agency David&Goliath crafted a campaign to blast off the Telluride X-Pro that is just as lofty as the heights a driver can reach in it.

A :60 spot titled “Clouds” befitting of the campaign tag line, “Welcome to a new elevation,” launches tonight, 9/12 during the 74TH EMMY® Awards and tells a cinematic story the likes of which we haven’t heard or seen before. Under the deft directorship of Philippe André of REVERIE Content, the tale opens up to a couple going for a drive through the scenic, winding canyons of Telluride, Colorado, up towards Imogene Pass, situated over 13,000 feet above the town. With no paved roads in sight, they traverse up the mountain on treacherous, narrow dirt and rock paths, and throughout their journey, encounter oddities including a man in a painter’s outfit pulling along his donkey carrying buckets of paint and further up the mountain, blue paint dropping on rocks from the sky. Finally, when they elevate to the top of the mountain, the couple realize they may have gone too far — finding two painters on scaffolding painting clouds in the sky, literally. The end result is a poetic adventure that flirts with the surreal, while showcasing the majestic mountains and rugged capability of the Kia Telluride X-Pro.

"When you have a vehicle this elevated, it gives you license to push the limits, and show something we haven't seen before,” said Ben Purcell, Chief Creative Officer at David&Goliath. “We partnered with Philippe André at REVERIE Content and the gifted VFX artists at KEVIN to make the heightened reality feel all the more possible. And to tell this story, there was only one place that felt epic enough for that journey to begin, and that's Telluride, Colorado. We faced lightning and mudslides, but the Telluride, just kept climbing. And earned its place at the very top.”

“As we built the narrative of the climb, I wanted to balance the real and the surreal elements, letting the story unfold into a spectacular reveal, said Director Philippe André of REVERIE Content. “I particularly loved adding this growing sense of surreality in the otherwise very epic and awe-inspiring mountains of Telluride.”

The spot kicks off a fully integrated campaign that takes social, digital, and OOH to a whole other level. Enthusiast print launches 10/1 and OOH goes live across markets nationwide on 10/3, while digital and social :30, :15 and :06 cutdowns of the spot run live on 9/12.

What comes to mind when you think of the power of a performance vehicle? It could be its loud, revving engines and tiny frame. Or the cacophony of... ler mais
AGENCY: ,

Sea turtles are critically endangered, with 1 in 1,000 surviving to adulthood. Kia wanted to help. In partnership with Sea Turtle, Inc. the brand... ler mais
AGENCY: ,

The driveway. Whether it was on your own home court or the neighborhood meeting spot where young ballers gather, shooting hoops in the driveway... ler mais
AGENCY: ,

So Irresistibly Crispy and Juicy, Life-Like Billboard Models Can’t Help but  Grab a Drumstick for Themselves Times Square is the epicenter for... ler mais
AGENCY: ,