While navigating through billboard and marketing websites, you’ve probably come across the term OOH (out-of-home) advertising, so what is it exactly? Essentially, out-of-home advertising is any advertisement that is experienced while outside of your home; pretty self-explanatory, right? The most common examples are billboards and other large formats like wallscapes.

OOH advertising is a bustling industry with a plethora of businesses specializing in the operations of OOH-based media, just like us. Since you’re here, stick around and embark on an exploration of this fascinating field of advertising. Here are the broad categories that makeup OOH advertising.

Billboards are the bread-and-butter of OOH advertising, and by far one of the oldest mediums. In a previous blog post about the history of billboards, we even noted how the first form of a billboard was utilized during the times of Ancient Egypt. Ever since then, this medium has continued to be an effective way to communicate to a mass audience.

With the creation of Johannes Gutenberg’s printing press, posters saw rapid production and were a popular method for mass communication.

“Street furniture” sounds like a funny set of words, but it describes advertising that is present on benches and transit shelters. One of the most iconic examples that I can provide is the Saul Goodman bench, a true staple of American pop culture that features one of my favorite TV characters ever. If you haven’t seen Better Call Saul, then check it out! (Hot take: Better Call Saul is way better than Breaking Bad, but that’s a blog post for a different day, dear reader.) 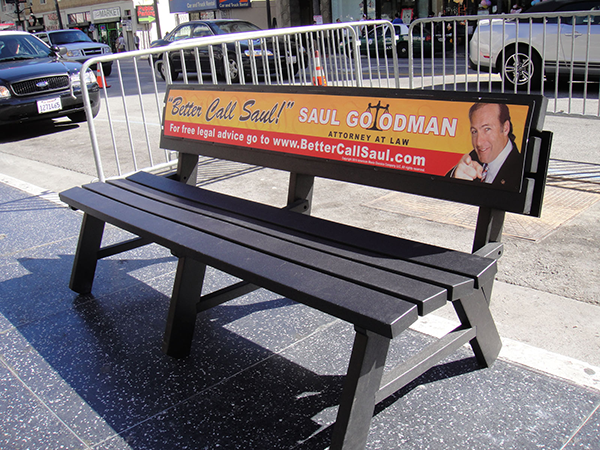 Saul Goodman has your back! Photo via Wikimedia Commons.

Another cool example of street furniture advertising can be found in the thumbnail of this blog post. Kit Kat transformed a mundane bench into a “delicious” presentation of their brand. For more details on this incredible campaign, check out the page here.

The renowned furniture company, IKEA, took a very literal approach to street furniture advertising. Throughout the subway stations of Paris, the company had actual furniture placed down so that travelers could rest their legs for a while. The pieces of furniture were complimented with a nice wallpaper featuring the company’s logo. This took place quite some time ago, but the creativity of it all continues to endure.

Any advertising that is placed on, inside, or around a transit system falls under this category. Think of ads placed on taxis, buses, inside of trains, etc. Our article here gives a break down of how BillboardsIn provides this option for our clients.

It can be argued that this form of advertising is actually the strongest out of the four categories, specifically when ads are placed inside. Think about it. When people are inside a taxi or subway car, they find themselves in a situation where they will be observing the surroundings for a longer period of time. This gives advertisements more time to present themselves in the eyes of the captive audience. It’s a concept that I call “increased eye time.”

Last but certainly not least, we have the alternative category. Seems rather vague and broad, but this is the perfect time to shine a light on some really out-of-the-box forms of advertising. To start, aerial advertising has always been a fascinating way to advertise.

Seeing a marriage proposal written in the sky by an airplane is simply jaw-dropping. In addition, blimps have always had this “futuristic” feel to them. There’s something mesmerizing and otherworldly about them floating through the sky with ads attached. The science fiction movie, Blade Runner, does a great job at capturing this feeling I’m describing.

There are also options like movie theater and TV advertising (which are pretty much exactly what they sound like).

BillboardsIn offers just about any kind of OOH advertising you can come across, and we’d love to help your advertising dreams come true. Start by creating a campaign on BillboardsIn.com.