2018 marks the 30th anniversary of the iconic Volkswagen California campervan. To commemorate this incredible milestone, Tribal Worldwide London and Volkswagen Commercial Vehicles UK has teamed up with artist Hixxy and Global Street Art (GSA), to create a mural in central London that celebrates the California’s rich heritage and spirit.

Through Volkswagen’s Commercial Vehicles social channels, Tribal called on fans to share their favourite adventure and camping locations from across the UK. The best and most inspiring among these were used as inspiration to create a mural that celebrates the Volkswagen California’s rich heritage and spirit. To do this, Tribal partnered with an East London based street artist, Hixxy, and with GSA, an organisation which helps create legal street art.

Located in Clerkenwell, Central London, the mural has been visible since the 10th November and will be featured for up to 12 months.

Jon Cleave, Creative Director at Tribal Worldwide London, answered a few questions about what went into making this happen. 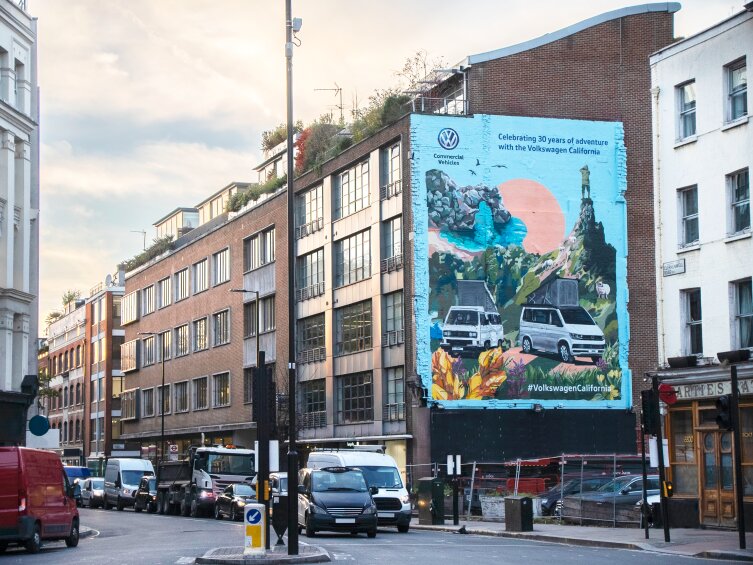 
Tell us about your role in the creation of this work.

Creative direction – From its conception through to seeing the final artwork painted on the side of one of London’s prime locations, collaborating directly with and overseeing the artwork from artist Hixxy and Global Street Art who helped bring it to life.

2018 marks the 30th anniversary of the iconic Volkswagen California campervan. To commemorate this incredible milestone, Tribal Worldwide London and Volkswagen Commercial Vehicles UK has teamed up with artist Hixxy and Global Street Art (GSA), to create a mural in central London that celebrates the California’s rich heritage and spirit.

30 years of Adventure  with the California Campervan

We wanted to bring the product to life through celebrating the sense of adventure it has brought its drivers and explorers for the past 30 years.

To bring ‘30 years of adventure’ to life, we used VW’s social channels to draw upon our audiences’ favourite British adventures, stories and hot spots across England, Scotland and Wales - and together with Hixxy, we created a collage to inspire locals and new California owners alike to hop in, buckle up and take their own adventures across the UK.

How did the client initially react to this idea?

Funnily enough, from all the gold silver bronze options, this was the wild card ‘platinum’ route at the end of the deck. So note to self – always present the wild card because it could be the favourite!

It took 8 months to create this, from our initial presentation to being painted in its prime location.

It’s also something that both our client and ourselves haven’t created before – a mural is a one-off creation and quite unique as an execution, so to choose this route was a bold choice to proceed with.

The final outcome – the mural itself.

Seeing the creative as this ‘one-off, large scale art piece’, beautifully crafted for a single location where over a million drivers pass through a month.

We hope it inspires future California Campervan owners to enjoy the next 30 years of adventure as much as the previous generations have.