It’s not a mock agency, it’s a real for-profit agency with the goal of making money 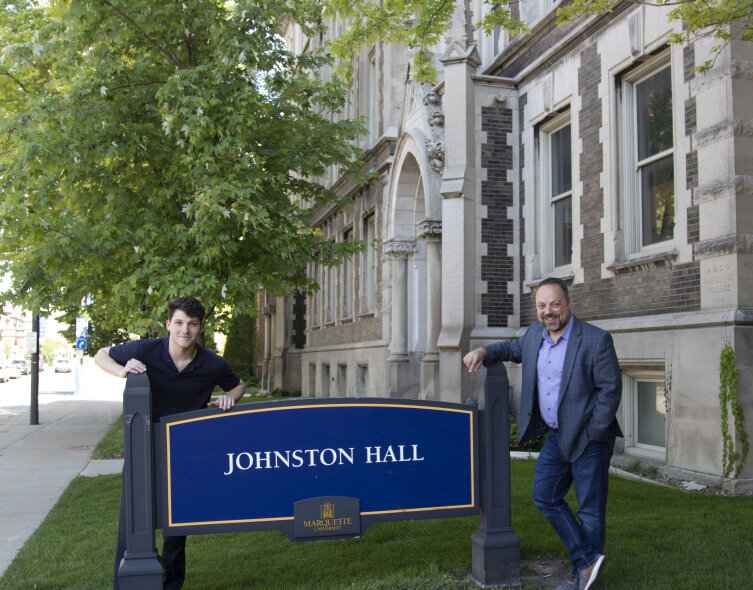 Leading the way, as the first student run full-service agency, the Carl Collective shows an innovative approach to student agencies in college. The partnership between Marquette University and Trozzolo Communications Group is setting the stage for students to receive real-world experience in the advertising industry before graduating. Student associates from the College of Communication are being assigned to clients, strategically and tactically supporting them while helping with efforts to launch, grow, and sustain the agency.

What made you decide to break out of the traditional guidelines for a student agency? What made you take the risk of innovating rather than staying with the norm?

Angelo Trozzolo: I always said if one of my kids went to Marquette, I was going to open another office in Milwaukee so when my daughter said she was going to go to Marquette I felt it was the time. I started thinking about if there was a way to do it as a partnership with Marquette, because I had always wanted to open an office in Milwaukee. We wanted to have students involved in this agency that will be far ahead of their peers at other schools when they graduate because they will have real world experience. It’s part of their educational experience and it is a job that will make them stick out job in a pile of resumes when they are out interviewing. It’s not a mock agency, it’s a real for-profit agency with the goal of making money. For us there was no other way to do it because we are a for-profit agency but for the university to take that chance to say we want to be the first one to innovate and try something like this is a big deal.

What benefits do you think students are gaining from access to a full-service agency rather than a mock agency in a collegiate setting? What benefits is it providing the community around Marquette as well?

Angelo Trozzolo: I think a lot of it for the students is just having that real world experience so that when they graduate, they’ll be prepared and know what it’s like to work in the real world. If you can manage a full course load and manage a full job like this, I think you will graduate well above your peers. Regarding the community, I think Marquette is so influential and important to Milwaukee. I love the fact that Marquette is part of it, there are no walls around this university. Marquette’s mission is, “Be the Difference,” and in so many ways they are a difference in the community. So, if we can be a part of the difference rather than just talking about things that is the goal. Our big goal is to make Milwaukee a better place to live through what we do. Having donors has also allowed our agency to do work for the community that perhaps we aren’t getting paid for.

Patrick Leahy: For students, one thing I noticed is that you do some intern work making phone calls but as a student associate you get to create a portfolio. You get to say this is my client, let me show you all the work I did for them. I think in a way, because we are expanding outside of Milwaukee to places like Franklin and South Milwaukee, we are in a way integrating the communities together. Donors have also allowed us to work for nonprofits in pro bono projects.

What would you say the goal of the Carl Collective is?

Angelo Trozzolo: To make that difference in the lives of the students and make Marquette that much more attractive to potential students. Also, building a successful and profitable office outside of Kansas City. I don’t think the two are mutually exclusive, I think we can do both. If someone sees us and copies us that would be great!

How was the process of creating a full-service communications agency different in a collegiate setting? What are the barriers between you and that goal?Angelo Trozzolo: Marquette is willing to be innovative and do new things, but no matter which school you’re working with, academia tends to move more slowly than the business world. The biggest barriers haven’t really been related to the University at all, it has really been more the world. It’s mostly just the challenge of doing something that has never been done before, but I look at that not as a barrier but as a great opportunity and a lot of fun.

What are the benefits of having students’ perspectives within an advertising agency? What are your hopes regarding the work that comes from these perspectives?

Angelo Trozzolo: No agency has the benefit of having this generation, at this age, as associates that are connected. I thought that would be important to our clients but not as important as they are saying it is. Clients really want that perspective; they want to understand that perspective. We aren’t simply making it up or surveying people, they are sitting and working here alongside us. I hope that it helps our clients solve their business problems. I hope that it helps our clients get a leg up on their competition because of this perspective.

Erik Brooks: We are asking that of ourselves right now, as we go into the market and decide what our point of difference is the idea of a student perspective is a huge pull for clients. There’s a strong interest to have the student perspective, meaning the Gen Z perspective. It’s an extremely valuable perspective that we offer in a unique way. My hope is to build some great solutions around the insights we receive from our student associates.

Who, in the advertising industry, inspires you most?

Angelo Trozzolo: I would have to say Carl Schrank, who the Carl Collective is named after. He had a successful career in the ad business in Milwaukee, he was well respected and won awards and then he came to Marquette to give back. He would always talk about the pay cut he took doing so but I don’t think he was ever complaining, I think he liked it. He had such an impact on my life not only at Marquette but after I left. I have always strived to be like him. He embodied the idea of a servant leader, someone who was a person for others. Even though he is not a name that others have heard in the advertising world, Carl to me was and is an inspiration.